One thing I notice from time to time is wall snot. Wall snot usually seems to take place above a urinal. I have found wall snot in a few places, some of which seem more unlikely than others. The place I used to work, which was an office setting, was one location that seemed unlikely. There were frequent violations of booger smear and pubic hair plantings on the walls and washroom fixtures. In an office! Well, not in the office, but in the washroom of the office. An office full of seemingly clean and well-dressed, educated people who might know better than to litter snot everywhere. And pubic hair, but that’s another story.

A more likely place to see snot and pubes would be where I am now: trade school! Surprisingly, the washrooms are actually cleaner than I expected. The graffiti is here and there, but not as much as I thought. Sure, there’s piss, but that’s expected. Piss on the floor is pretty common in public washrooms. I pissed on the floor at home last night – things happen! Anyway, I’m getting off track. I went to the can the other day at school and noticed a booger swiped on the wall at eye level. It really doesn’t bother me because I’ve seen stuff like that so many times before, but I just have to wonder why someone would do that. In a way I think it is a little funny. It’s mostly gross and inconsiderate, but there is some humour in it. Why do that?

(pick-pick-pick) “Fuck! That’s a biggie… where am I gonna put th…” (smears it on the wall)

Alternatively, it could be someone who is pissed off at something. Perhaps the price of tuition or parking has angered the person and they want to give a little back. (pick-pick) “Aaah. Take that, assholes.” (smear)

Could be a contest between rival trades. Maybe someone from electrical smeared snot on the wall last week and a carpenter came in later and was inspired to take things to another level.

Ultimately, I got a laugh out of it. Even the word “snot” makes me laugh. As I mentioned, it is a sick thing to do, but a little funny. The facility is full of adults who should know better, which makes is funny to me. I wonder if the culprit laughed a little when doing it. I wonder if they felt guilty. I even laughed a little when I took the picture. Why? Think about it – I’m 38 years old in a university washroom taking a picture of snot on a wall so I can write about it. Hopefully you’ll laugh, too.

Below: I’m laughing as I post this. I know it’s rude, but whatever. This is the shit that fellow humans do when nobody’s looking. 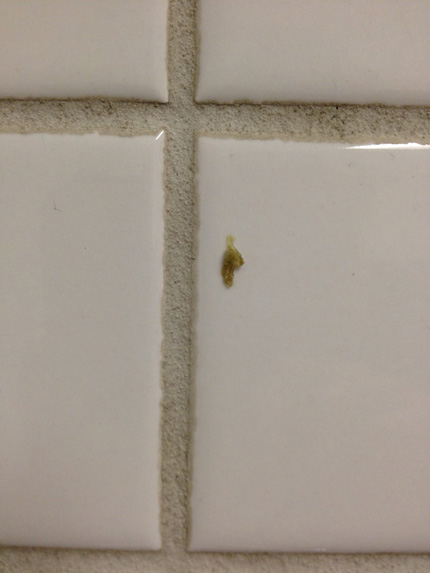