This post will focus on the spoiler and how I have hopefully fixed it. Specifically, the middle section of spoiler on the deck lid (which I think might actually be a little out of alignment, but that’s another adventure).

First things first. Scour the internet for possible fixes. As expected, my search brought me straight to http://www.thirdgen.org/, which is like the holy grail of information for third generation Camaro/Firebird enthusiasts. I found several helpful articles in the forums and took away the information I needed. Hopefully some of this information I’m writing here can help someone else!

The second step for me was to work up the courage to take the spoiler off the car and ignore the possibility that I might be destroying this thing. No problem, as two of the four mounting posts had let go of their adhesive and one was missing. The spoiler is secured to the deck lid with 4 bolts that are adhered to the bottom of the spoiler via the aforementioned plastic (nylon?) posts. The nuts are accessible via the underside of the trunk lid – just pop off the 4 plastic plugs. 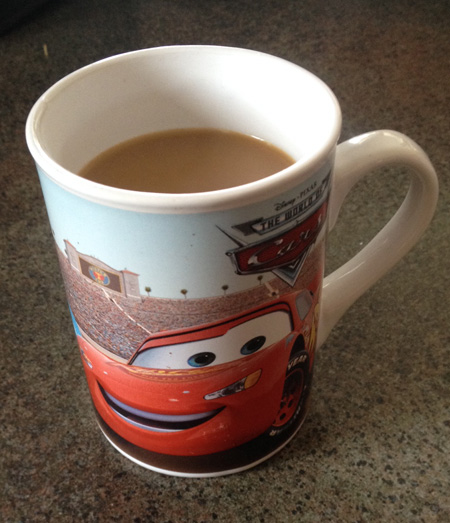 Above: The absolute first step to any project is a coffee. 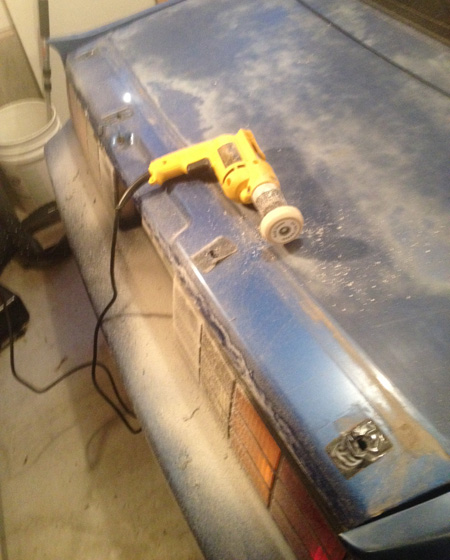 Above: Removal of the spoiler and buzzing off any adhesive with a Stripe Off wheel.

Next was a trip to the hardware store to find possible materials to recreate two of my missing mounting posts. Actually, only one was missing, but I lost one. Well, it’s not lost, as I know where it is. I dropped it down the hole within the trunk lid and I can’t get it. Fine. Stay there. Third generation F-Bodies are notorious for rattles, so what’s another one gonna do? Anyway, I bought new bolts, nuts, and washers, plus managed to find some plastic piping material in the plumbing section that was close to the diameter of the original posts. I also bought some two-part epoxy to adhere this stuff.

Now came the time to make some stuff! I mounted the plumbing pipe in my vise and marked off the same length as the original post, then cut to size with a hacksaw. To make the bolt head fit within the pipe, I used a step bit to ream the hole. I also made sure to sand both the inside of the pipe and the bolt head to provide some tooth for the new epoxy to grab. With the sandpaper out, I also scuffed up the mounting locations on the underside of the spoiler. 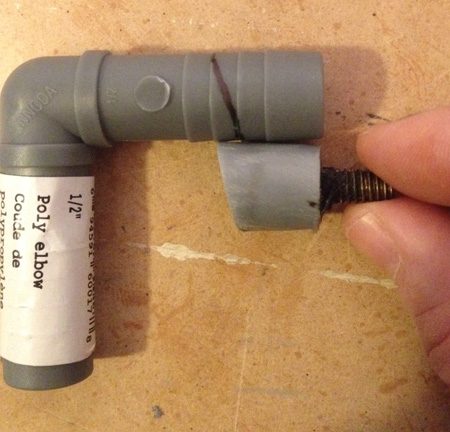 Above: Old post on bottom being used as a guide to mark out the new one.

Next was to mix the epoxy and very swiftly put things together. Swiftly, I say, as this adhesive, as I recall, has a 6 minute working time, which doesn’t leave a lot of room for second-guessing. And with something so strong as epoxy, I really wanted to avoid slobbering any of it anywhere I didn’t want it to be. I dipped the bolt heads in the epoxy first, then inserted them into the pipe. I then dipped the pipe (bolt head end) into the epoxy and placed it on the mounting location on the underside of the spoiler. After mounting all 4 (two that I made and two originals) to the spoiler, I went back to the two that I made and filled the gap between the bolt and pipe with epoxy. Then the spoiler was brought into the house (for warmth) to set up. 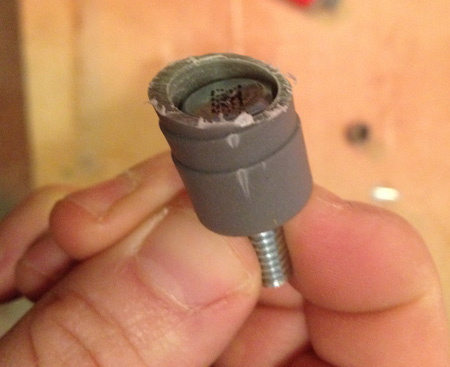 Above: Here’s my new mounting post adhered to the underside of the spoiler.

Finally, the time had come to mount the spoiler. The backside of the spoiler that wraps over the back lip of the deck lid had double-sided tape from the previous installation. Not sure if that was factory or not, but I’d be doing the same. This was the trickiest part, as the spoiler kept getting stuck out of alignment on the tape. I somehow managed to keep frustration to a minimum and eventually get everything set, possibly because I had pulled the car out to the street to work in the warm sun and my neighbors were outside. I didn’t think they’d want to hear me blasting off a series of the most heinous swear words ever imagined.

Well, to make this story even more lengthy, the epoxy that I used to secure the posts to the spoiler let go within the first half an hour of driving the car. I didn’t lose the spoiler, but lost my happy mood. I decided to pop in at a body shop to see if they might have any advice. Thankfully, the guy at the shop (even though it was closed) popped out of the work bay to take a peek and recommend that I get myself some SMC resin. After I hurriedly went to the store and grabbed what I needed, my buddy came over to help me get high off the fumes of this stuff and set things straight. At first we were a little concerned, as the resin didn’t seem to be hardening, but when it finally did, we could tell this was going to be the right stuff. I mean, anything that smells like that must be poisonous enough to adhere car parts together, right? The mounting posts were salvaged from my first attempt and put back into place with SMC resin.

Above: Spoiler mounted on the deck lid! Yes, it is a bit out of alignment. I believe the deck lid might be misaligned, which will have to wait another day. Yes, the car needs paint – I will explain in a later post.

That’s it! Now at least I can drive the car around a little without looking like a complete loser. Stay tuned for what’s next…